Census data is collected based upon the respondent's place of residence on Census Day, typically April 1 of the Census year.  Therefore, geography is very important when using census data.

While the Census does use geographies we are all familiar with such as states, counties and places (cities), it also uses geography very specific to the Census. Locally designated boundaries such as community planning areas, neighborhoods, police beats, library districts, etc. are largely ignored in favor of specialized Census geography which allows for a standardized way of looking at geographies smaller than a city. The key small areas are defined below.

Census Block: This is the smallest unit of Census geography. A block generally corresponds to what we would think of as a city block, bounded on four sides by streets. Depending on the area, other boundaries are used to define as block, such as railroad tracks, water, and even power lines in some rural areas. Blocks tend to be the most stable of the small Census geographies as population numbers are not generally used to define them. Only 100 percent data is tabulated at this level, as the population numbers are too small to tabulate sample data from the long form and still ensure respondent anonymity.

Census Block Group: A collection of blocks, a block Group is the smallest geography for which sample data is tabulated. An ideal Block group has a population of 1,500 people, with populations ranging from 300 to 3000 people.

Census Tract: Although a Census Tract is designed to be a relatively stable statistical subdivision of a county, they may change between Censuses because they are roughly based on population numbers. The ideal population of a Census tract is 4,000 people, but they may vary between 1,000 and 8,000 people. Although the tracts may change between Censuses, an effort is made to keep the areas comparable. For instance, a tract that had large population growth in the 1990 Census may have been split into two tracts for the 2000 Census, but those two tracts together retain the same boundaries as the original 1990 tract to allow a direct statistical comparison of the areas.

Zip Code Tabulation Area (ZCTA): This geographic area is roughly equivalent to the U.S. Postal Service Zip Code areas (both 3 and 5 digit) we are all familiar with. Since Zip Codes do not always line up with Census defined Blocks, ZCTAs were created in order to allow tabulation of data for Zip Code areas. A Census Block in placed in the ZCTA that corresponds to the majority of Zip Codes assigned to addresses in that Block. As a result, a ZCTA may not include all houses that receive mail in that Zip Code, but it is the best equivalent available.

Although Census data is available by a number of geographies (Congressional Districts, voting districts, etc.) the ones above are generally the easiest for breaking down a large city or county into more manageable and/or relevant sections. Always remember, it can still be very useful to pull statistics for the larger city or county to compare to your smaller area. For the most recent data from the American Community Survey, there is not data available at the Census Tract or Block level.

These, and other, census geography definitions are provided at the Census Bureau's Guide to State and Local Census Geography 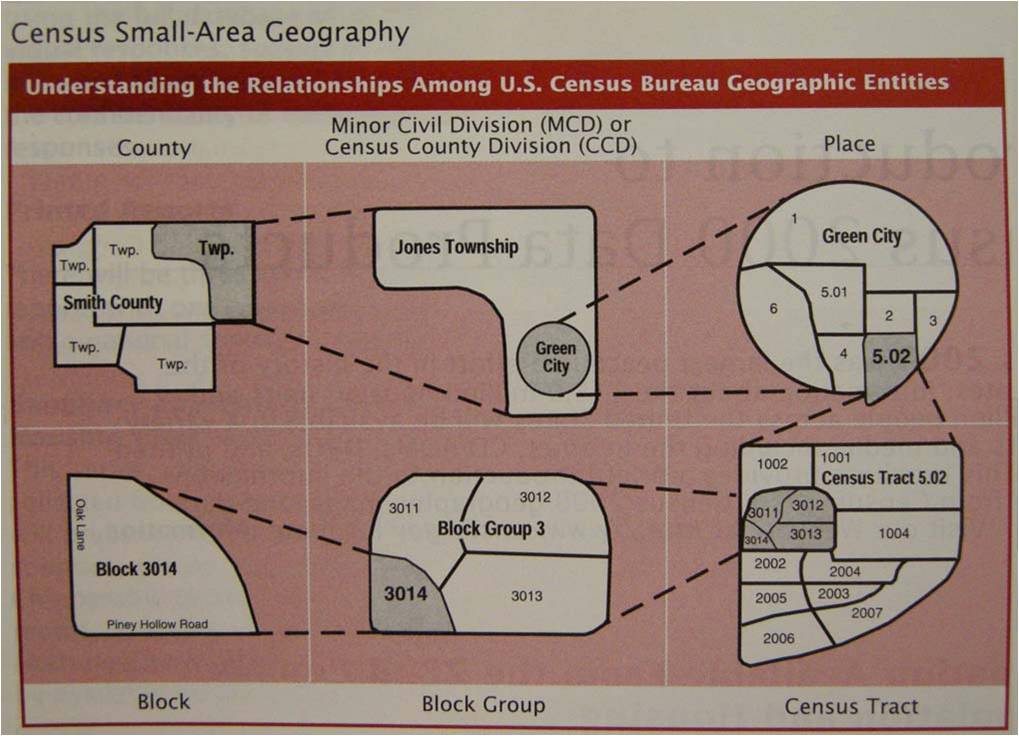 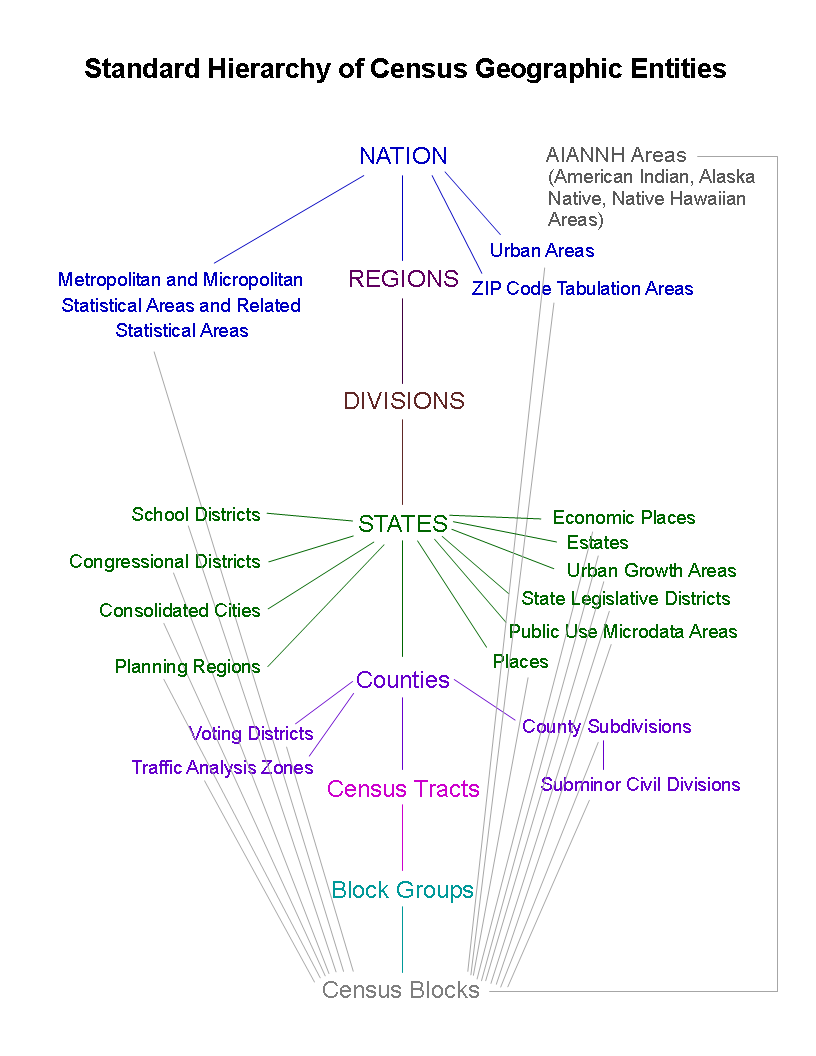 This diagram shows the many geographic types for which data are available from the U.S. Census Bureau. An explanation of the relationships between areas is provided in the Census Geography Atlas.

The most difficult part of defining your Census geography is figuring out how Census designated geographies overlay with the streets and neighborhoods we know from everyday life.

You will need to determine what Census tracts, Block Groups and Blocks best match up with your community to find the Census data you need. These boundaries may not match up exactly with the official boundaries of your community, but street maps and Census Tract & Block maps will help you define an area that will work best for your research.

Don’t forget! Census tract numbers & boundaries may change over time. Check all your Census years before making a final decision on community boundaries. To compare the same area using data from multiple census years, use the GeoLytics products described on the Comparing Areas tab on this page.  Remember, the farther back in time you go, the larger your Census tracts are likely to be.

Social Explorer (go to “maps” tab) is an online interactive mapping tool that can help you identify Census tracts and extract selected statistics for your community back to 1950. Social Explorer does not identify blocks or block groups, but does include streets and is an excellent way to quickly compare tract boundaries over time.

Comparing the same area using data from multiple censuses can be difficult since boundaries or numbering for census geographies, particularly areas smaller than cities such as census tracts and block groups, can change from census to census.  However, GeoLytics has created the Neighborhood Change Database (NCDB) which normalizes census tract boundaries and data for the 1970, 1980, 1990, 2000, and 2010 Census data. Census tract is the smallest geography for which data is available on these disks.

Appendix J of the Data Users Guide provides technical explanation of the methods used for data normalization on these disks.

Since these disks require staff assistance to use, please contact govinfo@northwestern.edu to make an appointment.