The Census Bureau is releasing these experimental data instead of the 2020 ACS 1-year estimates, which were negatively impacted by the COVID-19 pandemic. This will include a limited number of data tables for the nation, states, and the District of Columbia.  This data will NOT be available via data.census.gov, only at this site.

About the American Community Survey (ACS)

The American Community Survey (ACS) is an ongoing survey conducted by the U.S. Census Bureau since 2005. In 2010, the ACS replaced the decennial Census long form as the source of sample data for population and housing indicators. The short form of the decennial Census is still distributed to obtain a count of the entire U.S. population.

There are both benefits and challenges associated with replacing the long form with ACS. The primary benefit is the freshness of data: ACS data is collected every year, whereas the decennial Census was collected every ten years. Challenges include a higher sampling error for the ACS, due to a smaller sample population, and difficulties comparing data from year to year.

ACS data is incorporated into data.census.gov, the Census Bureau's primary data tool, with a variety of access points:

Northwestern University affiliates can find ACS data and maps in the Social Explorer database, and a selection of tables/reports in ProQuest Statistical Insight.

NUSearch lists several ACS briefs and reports, most of which are available online.  ACS Reports are also provided by the Census Bureau.  Examples of titles produced in 2015 -- Who Drives to Work?; Young Adult Migration; Remarriage in the United States.

The Census Bureau provides Guidance for Data Users, options to download data via FTP, and Public Use Microdata Samples (PUMS).

In deciding which estimate you want to use, you should consider a) the currency of data; b) the geographic size of your population; and c) the acceptable sample size/reliability of the data.  The Census Bureau chart below shows distinguishing features of the different estimates. 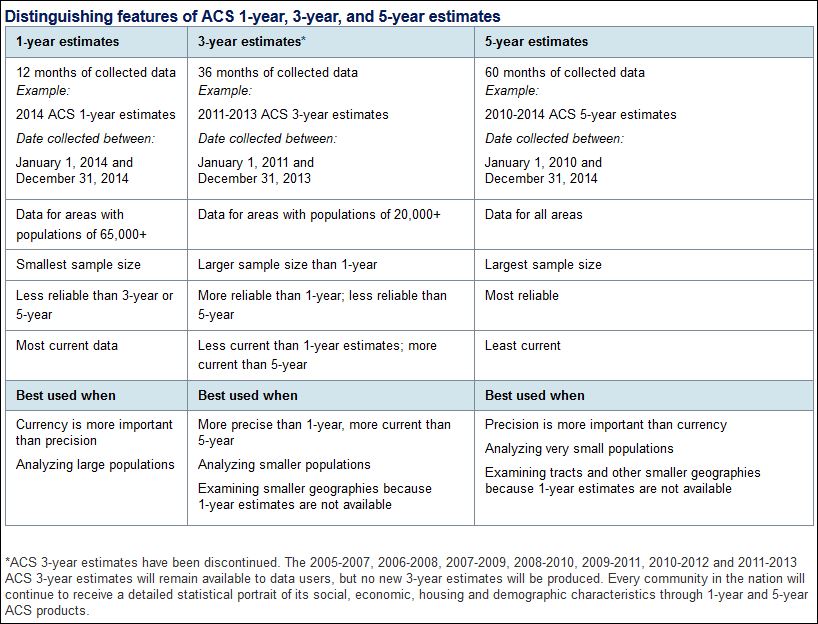