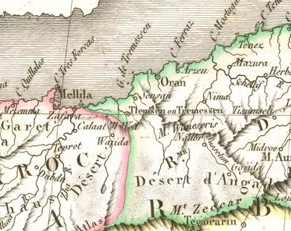 Features digital copies of 113 antique maps of Africa and accompanying text dating from the mid 16th Century to the early 20th Century. All scanned maps are authentic and originally collected by the Melville J. Herskovits Library of African Studies at Northwestern University.

Map coverage includes the continent, regions (particularly North Africa and Algeria), islands (particularly Madagascar), and a few city plans. All of these maps are loose items, though many have been excised from published atlases. Highlights of the digital collection are: a series of Ptolemic maps of North Africa by Ruscelli, ca. 1565; Forlani: Africa, 1562; Mercator: Africa, 1595; Blaeu: Æthiopia ca. 1650 (a Prester John map); Carey: Africa, 1795 (first map of Africa published in the United States), Arrowsmith: Africa, 1802 (notable for its large dimensions, 124 x 145 cm.), a series of Algerian maps published by the French government in the mid-1800's, and maps by other notable cartographers, such as Hondius, Jansson, de Jode, de L'Isle, Ortelius, Sanson, and de Wit.

The Libraries request users cite both the URL and Northwestern University Libraries if they wish to reproduce images from the repository. For access to higher resolution images please contact repository@northwestern.edu ; NO COPYRIGHT - UNITED STATES

Other Online Sources for Africana Maps