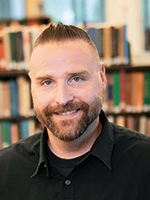 Use NUsearch to identify books that the library has, as well as journal titles, videos, maps, and other more.

Due to the libraries currently being closed, ebooks are going to be the primary way that you use book content. In NUsearch, you can search for what is in Northwestern Libraries' collections.

On the left-side of the results page, you can limit to books and ebooks

Find Books Outside of NU

WorldCat is a place you can identify books that NU might not have. Ebook records within WorldCat will not necessarily take you to the full-text unfortunately, but this may be way to find additional literature on your topic.

Text for the Class